In between posting these letters, it seems there are other parts of Stephen Sherwood's life to include as well.  I never know where this blog is going and admit it is far too easy to be distracted.  Following Stephen Sherwood is like going on an adventure of my own.

There are brick walls to climb over when we do family history, and I highlighted this in a recent post (Friday Funny).  Shortly after that post, I learned Stephen Sherwood actually sold bricks from his brickyard  to build brick walls.

Stephen Sherwood started his brickyard to build his own
brick house in about 1850.  There is a school there now.

The original bill of sale dated November 1856 says that Jake Strang purchased a total of 75,000 bricks for $4.50/thousand bricks.  About half of the bricks were used for his brother, Robert Strang's store.  These structures are located in Millburn, Illinois about six miles from "Sherwood Corners" where the brickyard was located. 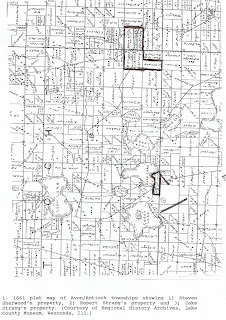 Source:  "Mixed Brick Construction:  A Case Study in Millburn, Illinois," by Sarah E. Polster.
Posted by the honeymoontrail.blogspot.com at 5:22 PM