In 1873, Stephen Sherwood was a witness in "The Great Mining Suit."

By 1870 the town of Pioche was properly surveyed and named.  Three year later the contested story of the founding of Pioche would be told in what The Pioche Daily Record called "The Great Mining Suit."

The court battle centered on two competing mining claims held by the Raymond and Ely Mining Company and the Hermes Mining Company.  The Hermes Company was an investment for George Hearst, father of the newspaper tycoon William Randolph Hearst

The Hermes Company claimed that the "Raymond and Ely title was based upon purchase of the original Panaca shaft from Stephen Sherwood's crew of Mormons and miners, who not only staked their claims improperly but created illegal mining laws and then voided their strikes anyway through years of abandonment." The jury trial ruled in favor of the Hermes Company, but Judge Fuller eventually ruled in favor of Raymond and Ely.

There was comprehensive coverage of the courtroom drama.  Crowds gathered outside the "Million Dollar Courthouse" eager to get seats blocking the sidewalk in front of the building and clogging all the avenues leading to it.  After the sheriff opened the door, every available seat was occupied.  It seemed to some the fate of the town hung in the balance, especially because rumors ran rampant that William Henry Raymond threatened to close the Raymond and Ely mine should his company lose the suit.

The list of witnesses called to testify included most of the district's founders.  Sherwood and Vandermark were there.  Thomas Box Sr. and Jr. both testified, as did Shirts, Pulsipher and George Hearst.  Expert mining witnesses also took the stand, as did a variety of Mormons peripherally involved in the case.  Noticeably missing from the witness list was Moroni, the Paiute principally responsible for instigating the entire contest, and his partner William Hamblin.  According to family legend, Hamblin had been subpoenaed to testify at Pioche in a similar case the previous year and the litigants, who stood to lose the most from his testimony poisoned his coffee before he could take the stand.  Hamblin was immediately struck sick and died a few weeks later at Clover Valley.  His widow, Mary did return to the scene of Hamblin's demise, as a witness in the Raymond and Ely case.

The details of this trial  and the events leading up to it can be found in Chapter 2 of Making Space on the Western Frontier by W. Paul Reeve.  There are some very interesting stories told in this book.

With all the arguments made, the Pioche founding story told and retold and then contested again and again, the lawyers finally left it in the hands of the jury.   At close to four o'clock in the afternoon of 30 April 1873, the twelve-man jury retired for deliberations.  Rumors spread rampant through the night that jurors had been "purchased like sausages," with some townsfolk freely making bets on how many jurors out of twelve Hearst had safely in his pocket, ranging from five to nine.  By half past eight, news spread through town that the jury had reached a verdict.  It was announced, "We the jurors impaneled in this case find for the defendant."  Nine jurors sided with the Hermes Company, while only three voted for Raymond and Ely.  The court ordered that Raymond and Ely "take nothing by reason of said action" and that they pay $4,987.24, the costs of Herme's defense.

The case did not end there however.  By the end of June, Judge Mortimer Fuller ordered that the previous verdict be "set aside and vacated." Like the earlier court case, interest in Fuller's decision ran high.  Judge Fuller ruled in favor of Raymond and Ely.  Rather then endure another protracted trial, however, Raymond and Ely brought an end to the courtroom drama.  They settled out of court, purchasing Hearst's interest in the Hermes mine for an undisclosed "high figure."  Hearst later recalled it this way:  "Got in with some men who had a set of Pioche mines, sunk a shaft, struck a bed of ore, had a big lawsuit over it, got out of that making two hundred and fifty thousand."

A Trip To Pioche Being a Sketch of Recent Frontier Travel by Charles A Sumner tells of George Hearst getting on the stage coach in Eureka.  He was on his way to the trial in Pioche.  Pages 12 and 13 describe Pioche in detail as it was in 1873.  Charles A Sumner  described the celebrated Raymond and Ely Vs Hermes case as "The largest milling case, the most hotly contested, and actually, by virtue of the title set up and most ably and vigorously urged on the part of the plaintiff, involving greater interest than were ever before staked in any similar encounter on the Coast." 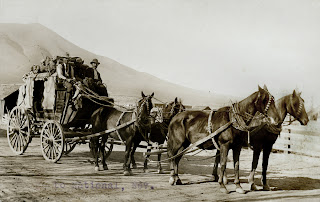 Posted by the honeymoontrail.blogspot.com at 12:52 PM