The Happy Dance - A New Find

It is time for the Happy Dance!  After an absence of over a year from posting to this blog, posts will begin once again. What prompted this?  I've drifted to another ancestor because  a posting by a patron in familysearch.org opened up the Sarah Sherwood Cramer line!  I want to share this story and what I'm sure will be a journey to learn more about this family.

Before I tell what happened, may I recommend a 12 minute video, "The John Sherwood Story."  This speaks of the parents of Sarah Sherwood Cramer, John and Lovisa Burtis Sherwood.  It also give a very brief account of each of their five children including Sarah.  Some of the scenes pass very quickly because the program did not allow more time for the sequences.  I apologize in advance for this.

"The John Sherwood Story," can be found on my last posting (scroll down to this posting) of December 4, 2014 on this blog, or click here to go to the video (Henry and Sarah Cramer are mentioned at 5:55).


I found Sarah's children but could go no further.  Finding the descendants of Sarahs' siblings was much more successful. Some of the  results of that research can be found by going to findagrave.com  and  following the links of the children.  There are from two to ten children listed for their children (who would be the grandchildren of John and Lovisa). The links in some cases go down several generations (and back as well).  For example the link from my mother Greeta A Davis (her mother was Cora Sherwood)  and each of her siblings go back nine generations  to Thomas Sherwood, the first Sherwood ancestor in America.

If you want try these links.  Follow the male Sherwood line, or just start from somewhere and go in either direction.  Notice there are no links for Sarah Sherwood Cramer going forward.  That is going to change. Again, try to get back to Thomas Sherwood, the first of this line to come to America.


Fortunately I was able to find the Revolutionary War Pension records which contained the Dutch Book Record listing the six children of Sarah Sherwood who married Henry Cramer.  If it weren't for that one document found in fold3, this family may have been lost to future generations.  However, nothing on their descendants could be located. This was my brick wall.  The tombstones of any of their children could not be found, nor any records indicating if they married and had children UNTIL NOW!!!  Thank You Marilyn Joy Cramer!

A recent check of familysearch.org revealed the following information on one of the children of Henry and Sarah Sherwood Cramer.  For the first time, Martin Overlocker Cramer was listed with a wife and three children below. 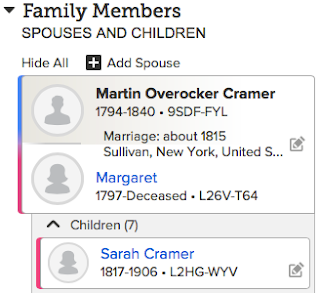 I had to know who was responsible for adding the vital information to familysearch.org so I went down the person page to this prompt and clicked "Show All Changes."

The following appeared on the screen:


When I clicked, the submitter,  Marilyn J Cramer's  name (above) the follow appeared on the screen: 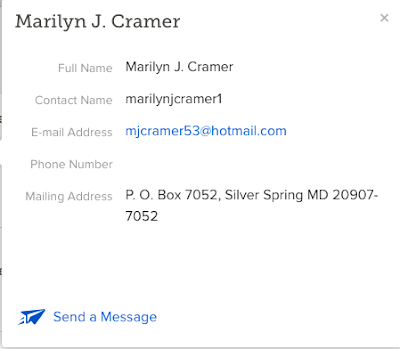 Fortunately Marilyn had left an E-mail and mailing address.  That is not always the case.  I wish there had been a phone number so I could have called her right away, but what more could I ask for.  How great it was Marilyn had chosen to share this information.

The next post will tell about getting in contact with Marilyn Joy Cramer and what was discovered.  Yes, after nearly forty years, it is time for the Happy Dance!

Go forward to see the video.


Posted by the honeymoontrail.blogspot.com at 1:36 PM