This section was included to illustrate the importance of census records.  Ancestry.com is a major sources for census records, and is often available in Local Libraries or Family History Centers for free.  You might want to try looking up one of your ancestors.  You can click the orange link in the next paragraph to find my ancestor, Stephen Sherwood, in my family tree in ancestry.com.

Stephen Sherwood is listed in Hoboken in the 1880 Census, but probably living in the New River area  (which is crossed out), in household #44 in Trinity County, California.  ANCESTRY.COM census records show Stephen Sherwood in 1840 (Plainfield, Will,  Illinois), 1850  (South Fork of American River, El Dorado,  California), 1860 (York (Oregon House), Yuba,  California) , 1870 (Antioch, Lake, Illinois, and 1880 Hoboken (New River), Trinity,  California).  Yes, he was an adventurer.  Check out these census records in ancestry.com by clicking the orange prompt (then click on "source citations" to view the actual census records).  I just learned how to use the "link" so you'll see more material referenced online in future posts.  This blog is a work in progress if you hadn't noticed.  :-).  Stephen Sherwood was also involved in mining and business dealings in Pioche, Lincoln, Nevada from 1863 to about 1876, but was not there in 1870 to be listed in the census. 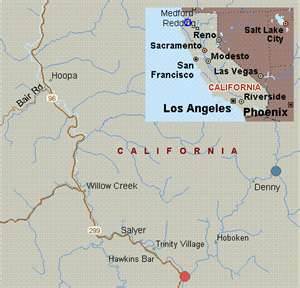 Hoboken,  Trinity, California
Although the census listed Stephen in Hoboken, he likely lived in New River which is crossed out in the census record.  He is listed on the voting records (view "original image") in New River in 1879.

He (Stephen Sherwood) "While in the vicinity of Shasta this mineral belt attracted his attention.  He followed it until he camped in what is known as the New River District, exclaiming, "Eureka."
Trinity Journal, Jan. 10, 1885

This  well written book (above)  by Valerie Budig-Markin which includes photographs by Ellen "Nellie" Elizabeth Ladd and Valerie Budig-Markin tells the story of life in this area.  Stephen Sherwood lived here until his death in 1894.  Valeria Markin says:  "A legend was born, with Stephen Sherwood as its hero.  News of the gold rush picked up from local newspapers had been taken up by the San Francisco Evening Post on Jan. 2, 1885."  Valerie says the discoveries by Stephen Sherwood and Clement/Clemens (his partner F. J. Ladd would be there shortly), set "off the upper New River district mining boom."  (See Trinity Journal Sept. 30, 1882 and Dec. 9, 1882)

Posted by the honeymoontrail.blogspot.com at 1:47 PM