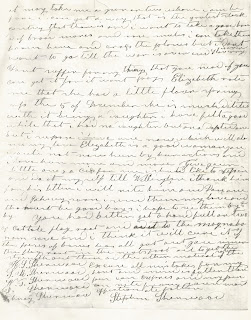 (he is writing, I believe, some things to do to help Wellington)

The "little flower" that Elizabeth had "spring up the 5 of December was Hattie Sherwood.  This was the first daughter for Stephen and Elizabeth.  Stephen had a daughter, Maria, from his first wife, Mariah Hubbell.  He had a second daughter, Elizabeth, from Sophia Parker.  Elizabeth died in 1843.

Stephen Sherwood had high hopes to make some money here, but his next letter is not written from Canyon City or even The Dalles.  This statement will explain why Stephen and Elizabeth were not there the next year.  The Oregon Guide stated:  "By 1863 the number of miners digging gold at Canyon City had been reduced from 10,000 the previous year to 700...... the discovery of gold in others fields practically depopulated Canyon City that Winter."   (Quote under "The 28 Hour Pony Express Run from Canyon City to the Dalles.")  Stephen Sherwood would be part of that depopulation.  Once again it was time for Stephen Sherwood who was called by The Trinity Journal (Jan. 10, 1885) "A 49er frontiersman and inveterate prospector, who, like the Wandering Jew, drifted from place to place in search of new discoveries, fresher fields and fairer flowers"  to move on.

If you are reading this, please tell me in a comment, where you think Stephen Sherwood will be in February of 1864 when he writes his next letter.


Posted by the honeymoontrail.blogspot.com at 1:00 AM