CLICK THE LOGO (UPPER RIGHT) AND ENTER HIS NAME>>>>

(MANY COLLECTIONS TO CHECK AND INSTRUCTIONAL MATERIALS) 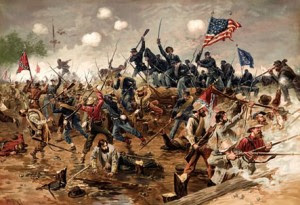 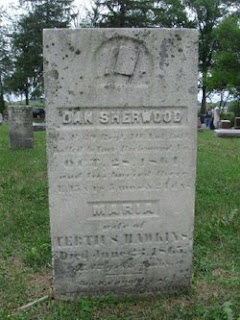 Daniel's half sister, Maria, died the next year (1865).  A gravestone was made to remember Daniel as well.  This memorial is located in find a grave.com. It is in the Angola Cemetery in Lake Villa, Lake County, Illinois. 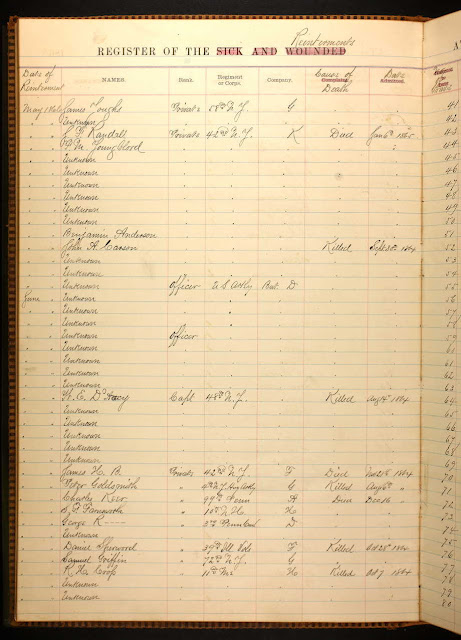 This was a fortunate find at ancestry.com which is a "Register of the Reinterments."  Most of the soldiers were listed as Unknown.  Fortunately Daniel Sherwood was included.  He was a private in the 39th Illinois Regiment Company F and killed on October 28, 1864 as was listed here.

Where was he buried?  The Nationwide Gravesite cemetery Locator (for Vetereans) was checked for Daniel Sherwood.  For the first name Dan had to be used with "contains" instead of "exact match" under the search options.  You can then click "Fort Harrison National Cemetery" or "View Map"  Daniel is probably buried near the building.  Scroll down the page to "Historical Information" to find out more about Fort Harrison.  Again, it is fortunate Daniel Sherwood was found because "As of July 1876, 239 of 814 interments were known while 575 were unknown, including four  Confederate prisoners of war." 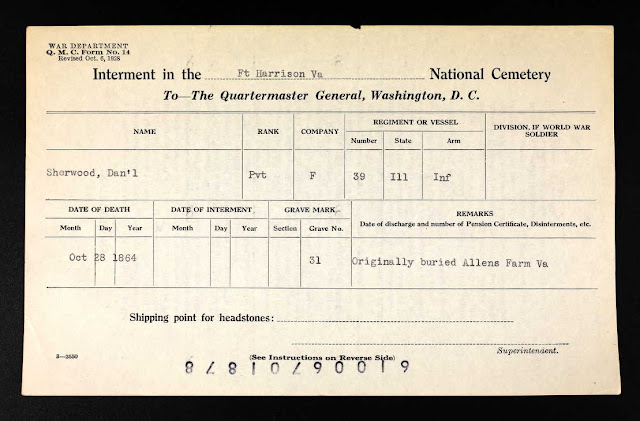 This document was obtained from ancestry.com  Note that it show Daniel was originally buried at Allens Farm Va.  He was later reintered in the Fort Harrisons Va National Cemetery.  His name is spelled Dan'l.  That is why Daniel could not be found in the Nationwide Graveside Locator until the search option was changed to "contains." 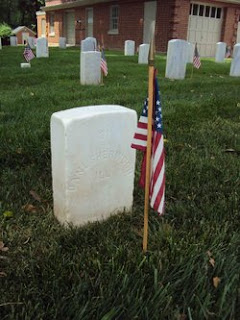 
"There I stood at the head of my Regiment on the very ground.............General Robert E Lee was compelled to surrender by our brave boys.  It was to accomplish this very end that they had left home and friends and periled life and limb time and time again; and oh! How many of them are now sleeping the soldier's long, long sleep, unmindful of this great achievement."

"Here we recognized the end of this wicked rebellion; and you may be sure gratitude filled our hearts when we contemplated this grand result of all our toils, our hard marches, hard fighting and exposures." 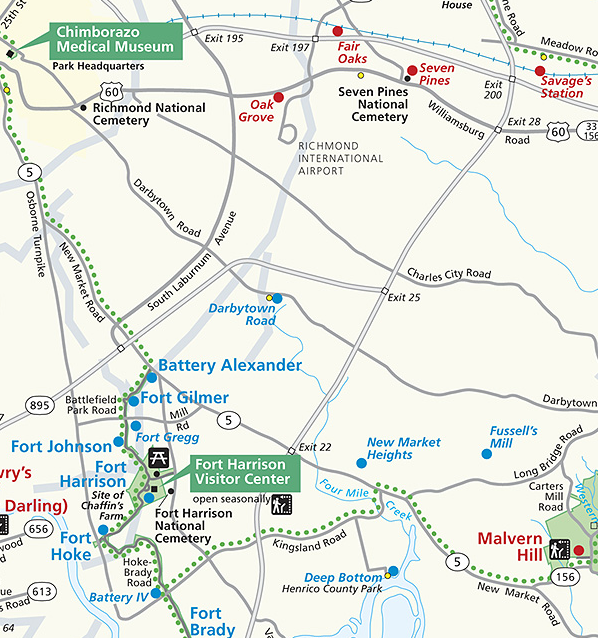 This video reminded me of those Civil War soldiers


Posted by the honeymoontrail.blogspot.com at 8:22 AM