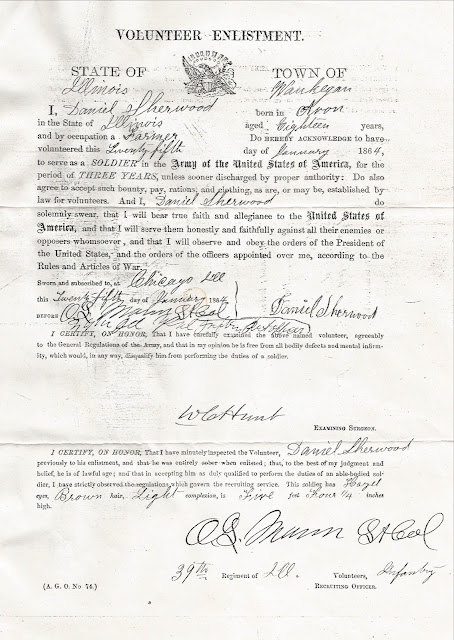 I, Daniel Sherwood,  born in Avon in the State of Illinois aged Eighteen years, and by occupation a Farmer Do HEREBY ACKNOWLEDGE to have volunteered this Twenty-fifth day of January 1864, to serve as a SOLDIER in the Army of the United States of America, for the period of THREE YEARS, unless sooner discharged by proper authority:  Do also agree to accept such bounty, pay, rations, and clothing, as are, or may be, established by law for volunteers.  And I, Daniel Sherwood, do solemnly swear, that i will bear true faith and allegiance to the United States of America, and that I will serve them honestly and faithfully against all their enemies or opposers whomsoever, and that I will observe and obey the orders of the President of the United States, and the orders of the officers appointed over me, according to the Rules and Articles of War.

Sworn and subscribed to, at  Chicago Ill
this Twenty-fifth day of  January 1864                             Daniel Sherwood
BEFORE (Two Names difficult to read)
I CERTIFY, ON HONOR, That I have carefully examined the above named volunteer, agreeable to the General Regulations of the Army, and that in my opinion he is free from all bodily defects and mental infirmity, which would, in any way, disqualify him from performing the duties of a soldier.

I CERTIFY, ON HONOR, That I have minutely inspected the Volunteer, Daniel Sherwood previously to his enlistment, and that he was entirely sober when enlisted; that, to the best of my judgment and belief, he is of lawful age; and that in accepting him as duly qualified to perform the duties of an able-bodied  soldier, I have strictly observed the regulations which govern the recruiting service.  This soldier has Hazel eyes,  Brown hair, Light complexion, is      Five feet Four 1/4 inches high.

Two names too difficult to read 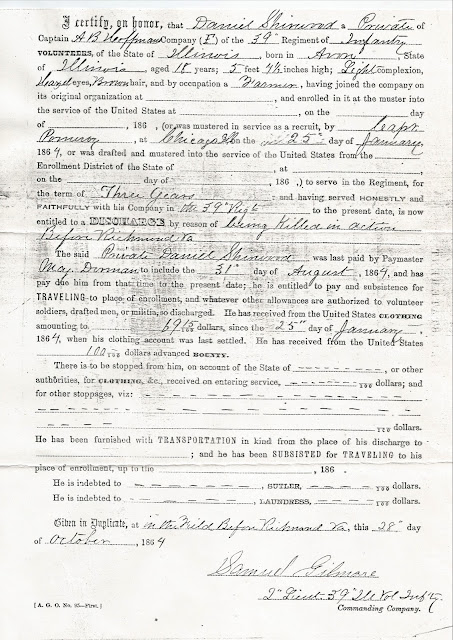 1860 Census shows Dan Sherwood was living in Antioch, Avon, Illinois in 1860 with his family.
He was only 15 years old when he enlisted in the Civil War in January of 1864

"Company F" of the 39th Illinois Regiment.  In addition to Dan Sherwood, note that Henry Fiddler and Adelbert Van Patten, from Antioch have a date of muster in Waukegan on 31 January 1864.  Thomas H Kennedy and Thomas W Kennedy from Antioch, who, I believe, were cousins, joined the Regiment the next month.  There was a Fiddler Family who were next door neighbors to the Sherwood Family in 1870 in Antioch.  Daniel Sherwood, Adelbert Van Patter, and Henry Fiddler may well have gone to Waukegan together.  Daniel's friends died in the War just over two months before he did.

Adelbert Van Patten, Thomas H Kennedy,  Thomas W Kennedy, and Henry Fiddler were all killed on August 16, 1864. These soldiers were from Antioch and likely were acquainted with each other in that small town before volunteering for the War.

Colonel Homer A. Plimpton wrote the following of this battle:  (August 16, 1864)

"The scene which now presented itself to my view I shall never forget--whole divisions of the advancing column swept down in a twinkling of an eye.  On every hand could be seen dead and dying men; our own comrades, who but a short time before were buoyant and hopeful, no thought of death to make them sad." (389)

They were buried the next day:

"On the 17th, the day after the battle, our dead were brought into our lines under a flag of truce and decently buried.  Our brigade's share in the dead was over 250." (391)  One can only imagine the grief of sixteen year old Dan Sherwood over the loss of his four friends from Antioch.


The 39th Regiment history showed that on August 16, 1864 the Regiment attacked the enemy at Deep (Valley) Run (Second Battle of Deep Bottom).  The links at that site will give added information, pictures, and a map.


Fair Oaks and Darbytown Road  was where Daniel Sherwood lost his life on October 28, 1864.  This was a confederate victory and about 600 prisoners were taken.  This battle recorded Union casualties of 1603 and Confederate casualties of fewer than 100.  If you scroll down on the map you will see Darbytown Road and Deep Bottom Park.  A satellite view is also available.

Colonel Homer A. Plimpton wrote of this battle:


"On the 26h of Oct., orders were received for an advance and on the 27th the corps advanced to the front again near the scene of the late engagement on the 13th of Oct., where they met the enemy and for two days more or less fighting was done.  The 39th at this time was not called to take a very active part and hence our losses were small." (404)  But certainly not small for Private Daniel Sherwood who lost his life at this time or his family who would grieve for the loss of this young man.

There is no way of knowing, but the following entry in Homer A Plimpton's Journal might apply to Daniel Sherwood:

"Miss Clara Barton is with us in our hospital department, attending to the wants of the wounded, furnishing little delicacies that no one but a woman knows how to prepare and giving comfort and encouragement to the sick and wounded both day and night.  She is a second Florence Nightengale among us and we appreciate her services at this and other trying times most sincerely." (406)

Could she have attended to Daniel Sherwood?

Of the battle of the 13th of October referred to above, where Daniel likely saw action as well, Colonel Homer A Plimpton said: "Our little regiment lost six brave men in less time than it takes me to write it."  Of this loss he wrote:

"In strong, fierce, headlong fight they
fall, as ships go down in storms,
They fall, and here whirlwinds, swept o'er
their shattered forms."(402)


After this Battle of Fair Oaks and Darbytown Road there seemed to be a general cessation of operations at the front and the whole army prepared to go into winter quarters.  Pleasant camps were selected near their line of works.  Had he survived that battle, Daniel Sherwood would likely have been at or near Appomatox Court House when Robert E Lee surrendered to Ulysses S Grant.  A week after that historic event  Daniel Sherwood's Regiment would have heard of the assassination of Abraham Lincoln.  Colonel Homer A Plimpton  of Daniel Sherwood's  Regiment said:  We never knew the depths of our love for that noble man until we heard of his cruel murder." (421)

Quotes from The Civil War Journal are in red with the page numbers in parenthesis.


The next post will relate an unexpected discovery made about Daniel Sherwood,

Posted by the honeymoontrail.blogspot.com at 11:49 AM