The blog is ahead of the story.  Ever since the Articles of Agreement were discovered,  December 17, 2012, I have been blogging about them instead of posting the next Stephen Sherwood letter.  "An Early Christmas Gift," "Name Dropping," and "From Rags to Riches," have been posted about finding the Articles of Agreement and summarizing their contents.  But from the last published letter (April 6, 1863) to when the Articles of Agreement were signed (October 26, 1867) over 4 1/2 years need to be covered.  Stephen was far from claiming any reward from his mining ventures in February of 1864 when this letter was sent to his son, Henry, in Illinois from Salt Lake City.  I should have posted this letter yesterday, to celebrate 149 years since it was written.  I did the best I could to "translate" it, but you will get an idea of what is happening in Stephen's life at that time.


This letter was possibly written at the home of Thomas Box on the corner of 1st North and 1st West*
in Salt Lake City.  Thomas Box had purchased land there in 1860.  Stephen Sherwood
was boarding at the Box home in February of 1864. (see note below) 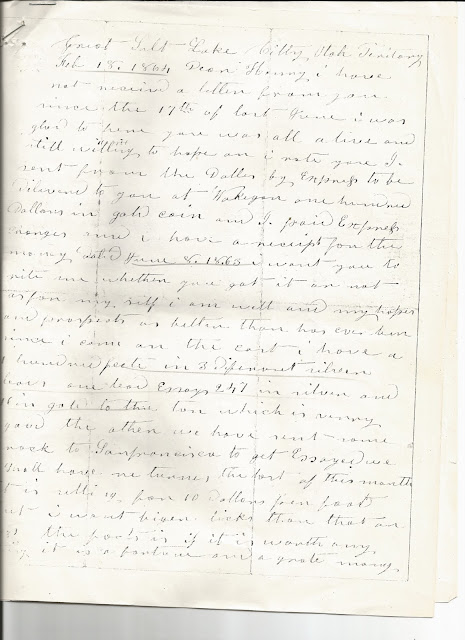 Dear Henry i have not received a letter from you since th 17th of last June  i was glad to here you was all a live and still willing to hope  an i rote you  I sent from?? the Dalles by Express to be Delivered to you at Wakegan one hundred Dollars in gold coin and I paid Express charges and i have a receipt for the obey Dated June 8, 1863   i want you to rite me whether you got it or not  as for my self i am well and my hopes and prospets are better than has ever been since i came __ the East??  i have a  ___hundred ___ in 3 Diferent silver bar ___ and _bar? Essay 247 in silver and 16 in gold to the ton which is very good  the other we have sent some rock to San francisco to get Essayed  we ___have re turns the last of this month  it is selling from 10 Dollar___ foot but i want bigger licks than that an ___the fact is if it is worth any thing it is a fortune and a grate many 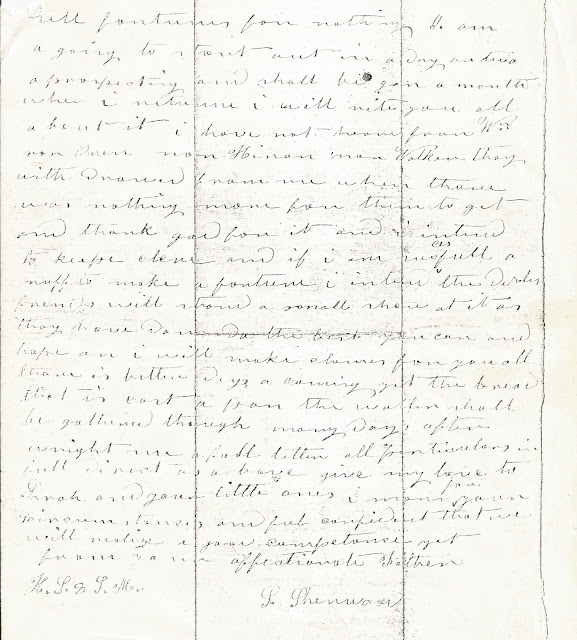 sell fortunes for nothing  I am a going to start out in a Day or two a prospecting and shall be gon a month  when i return i will rit you all about it  i have not heard from William Oren and Hiram ___Walker they with Drawen??  from me when there was nothing more for them to get and thank god for it and i intend to keep clene?? and if i am successful a nuff to make a fortune  i intend the Dat ___ ____will st____ a small share? of it as they have done?  Do the best you can and hope and i will make claims for  you all  thare is beter Days a coming, yet the bread that is cast upon the wather shall be gathered through many Days after a night __ a full letter all particulars in full   Direct as a bove???
give my love to Sarah and your little ones  i miss your ___circumstances??   and feel sufficient?  that we will realize a g___competance yet.

from your affectionate Father S. Sherwood

In February of 1864 Stephen Sherwood was boarding at the home of Thomas Box in Salt Lake City, Utah.  At this time he encountered an old mining friend, Jacob N. Vandermark.  Stephen said in the letter:  "I am a going to start out in a Day or two a prospecting."  He must have left about February 20, 1864.  Stephen travelled  with Thomas Box, Thomas Box Jr., Peter Shirts, and Jacob Vandermark.  They arrived in Southern Utah in March.  Source:  Making Space on the Western Frontier, Page 23-24,  by W. Paul Reeve.

According to the blog, "clmroots," The "Salt Lake City Directory" lists Thomas Box living on the corner of 1st North and 1st West in 1869.  He had purchased the property in 1860, and could have been living there in 1864 as well when Stephen Sherwood was boarding with him.

For more on Thomas Box go to the blog "clmroots"  The information on where he lived was obtained there.  Click here to go there.

Posted by the honeymoontrail.blogspot.com at 10:01 AM