This following letter to Wellington T. Sherwood was written the same day Stephen wrote another son, Henry, which was posted recently.  In that post, Stephen Sherwood was boarding on the corner of 1st West and 1st North with the Box family in Salt Lake City, Utah   My gg grandfather had been in California, Oregon, and finally come to Salt Lake.   He was possibly boarding on the opposite end of the  same block where I "boarded" (rented) about 120 years later (2nd West and 2nd North-- 1983-1993).  Even if the streets have changed slighly, we were living close to each other 120 years apart.  I have gone back to the future.   I believe he was writing letters to his two sons in what is  now a parking lot where I sometimes park to visit the Family History Library.  Think about it.  It is very possible I park where he boarded with the Box Family.  From there, I visit the library to find out more about him and his family.  Too bad I can't just bring back the house on that property and go in and visit with Stephen.

This is the second letter Stephen Sherwood wrote on February 18, 1864.  This time to another son, Wellington.  He was concerned about his sons's health. 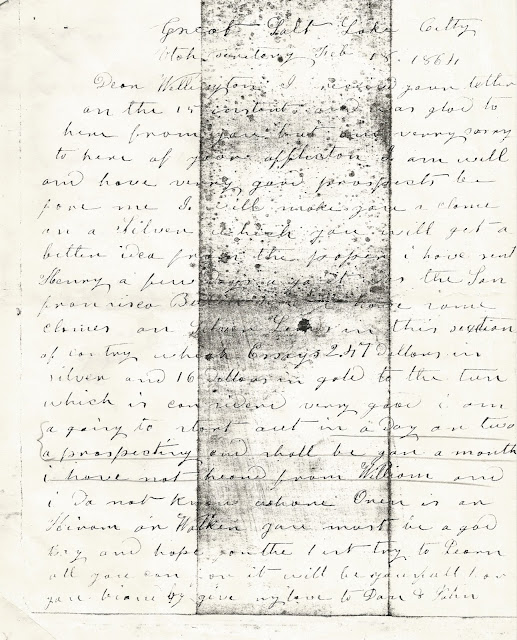 Dear Wellington I received your letter on the 15 instant and I was glad to hear from you but am verry sorry to hear of your affliction.  I am well and have verry good prospects before me.  I will make you a clame __ a silver which you will get a better idea from the paper i have sent Henry  a few Days a go it was the San francisco B ____ __ I have same clames on Silver Le ____ in this section of  country which essay 247 Dollars in silver and 16 Dollar in gold to the ton which it considered very good   i am a going to start out in a Day or two a prospecting and shall be gon a month  i have not heard from William and i Do not know where Oren is an Hiram an Walker?   you must be a good boy and hope you? the best try to Learn all you can for it will be you full for you ___ by  give my love to Dan & John 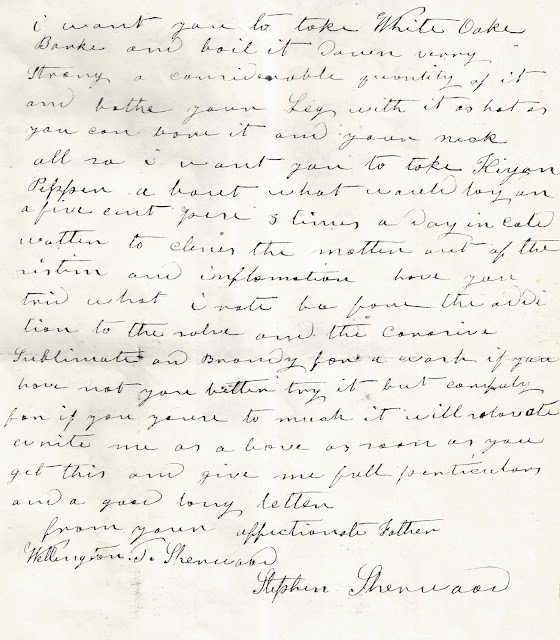 i want you to take White Oake Barke and boil it Down verry Strong a considerable quantity of it and bathe your Leg with it as hot as you can bear it and your neck  all so i want yo to take Kiyan Pepper a bout what would lay an a five cent pese 3 times a Day in ___ wetter? to clenes the matter? out of the sistem and inflamation have you tried what  i rote be fore the addition to the salve and the ____ Sublimated and Bandy for a week if you have not you better try it but carefully for if you  ___to much it will _____  a rite me as a bove as soon as you get this and give me full particulars and a good long letter

Wellington T Sherwood was listed in the 1870 Census with his parents, but was not found after that time.  It is not known when he passed away or where he was buried.  This is one of those mysteries genealogist encounter on their journey.

Posted by the honeymoontrail.blogspot.com at 3:15 PM