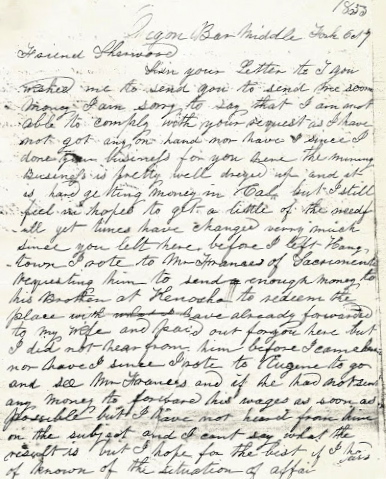 Friend Sherwood
Since (?)  your Letter to T you wished me to send you to send me some money  I am sorry to say that I am not able to comply with your request as I have not got any on hand nor have I since I done your business for you here  The mining Business is pretty well dried up and it is hard getting money in Cal  but I still feel  __hope to get a little of the _____ yet times have changed very much Since you left here before I left Hangtown i rote to Mr Frances of Sacramento requesting him to send enough money to his Brother at Kenosha to redeem the place with what (?) I have already forwarded to my wife and paid out for you here but I did not hear from him before I came here nor have i since I rote to Eugene to go and see Mr Frances and if he had not sent any money to  forward (?) his wages as soon as possible but I have not heard from him on the subject and I cant say what the ____is but I hope for the best if I ___ of known of the situation of affair

A.T. Maltby  (Alanson T. Maltby).  in 1860 was listed with his wife Susan and their three children in Goodale, Lake, Illinois adjacent to where Stephen Sherwood's home was located.  They were likely acquainted and involved in business dealings in California.  In 1870, he is listed in Decorah, Winneshiek, Iowa with his wife and two children.  He died there in 1875.  He was born about 1809 in New York.

Eugene was likely A.T.'s oldest son from his first wife Priscilla.  He may have been living in Goodale   with his step mother, Susan, and children when his father wrote him to go and see Mr Frances (at Kenosha).  Apparently this brother had another brother of Sacramento (see letter).

The husband of Laura (Dennick) Francis was Artius (Aretas) Francis.  Stephen married Laura's daughter, Elizabeth Dennick, after his second wife, Sophia died.  They were married shortly before this letter was written (September 24, 1853).  They were both buried in Bristol, Kenosha County about seven miles over the border in Wisconsin. Kenosha is about twenty miles from Antioch.  So there seems to be a connection between the Frances, Maltby, and Sherwood families mentioned in this letter.

Eugene (1832-1917) was in Siskiyou County, California when the 1880 and 1900 Census was taken.  He was in Butte County, California when the 1910 Census was taken.  He had a sister, Julia Ann Maltby who married Charles Simons.  They may have been in Sacrament about 1850.  Julia died about 1858.  I believe Eugene and Julia were children of the first wife of A.T. Maltby, Priscilla.

Posted by the honeymoontrail.blogspot.com at 11:01 AM