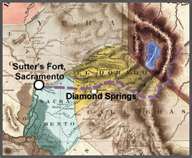 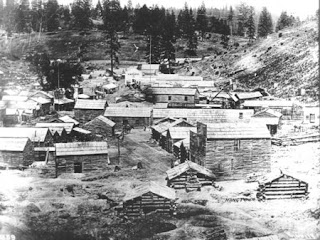 With respect to a Fathers (?) and in answer to yours of the 16 _ improve this opertunity also to inform you that I enjoy good health and am at work on the middle fork of the American River  times has ben very dull this summer  there has not ben much (?) ___ mining done in dry digens  they did not get in the rivers until the middle of Sept  some ar doing well while others ar not making wages so not thing (?) of  the expense of flooming (?)and and putting in their pumps  The river is flooded over three miles here the best clames? ar  in poverty  and  ____ a bar (?) they work them night an day  There has not ben very heavy emigration here this season   the most went to  oragon  a great many cattle and sheep drove acrost this season  most of them pas (?) ____ Dimans (Diamond) spring an Hangtown   in ___ ___  of those places wages ar from thirty to forty Dolars a month

The three towns mentioned here are Dutch Bar, Hangtown, and Diamond Spring.  They are all near Coloma, where gold was discovered in 1848.  Dutch Bar is about seven miles west of Coloma. Hangtown is nine miles southeast of  Coloma, and Diamond Spring is about three miles south of Hangtown (Placerville).  It is difficult to tell from the writing if the person who wrote this letter is the same person mentioned as being with Stephen in his letter of March 1, 1850 to his wife.


Posted by the honeymoontrail.blogspot.com at 12:00 AM